When it comes to safe storage of Bitcoins (BTC), there is almost no dispute that cold storage is the absolute gold standard. In simple terms, cold storage is the storage of cryptocurrencies such as Bitcoin in an offline environment, which effectively isolated them from the hacks of theft commonly associated with online storage.

Although many cryptocurrency users have heard of cold storage, few actually know about the origins of the technology, and mistakenly believe that cryptocurrency hardware wallets are the only cold storage options possible. However, the truth is the cold-storage technique was firmed innovated by the developers of Armory wallet, which is described as a “first-of-its-kind interface for easily managing offline wallets.”

To achieve this, Armory makes use what is known as “the Glacier Protocol” to provide true offline storage of Bitcoins, while wrapping this functionality up into a simple user interface through the Armory wallet software. This not only has the benefits of being extraordinarily secure, but also does away with the long sync times often associated with Bitcoin wallets.

Setting up an offline wallet on an offline-only device, such as an inexpensive laptop is a fairly straight forward process, taking only a few minutes to complete. In this tutorial, we will guide you stepwise through the process, allowing you to safely your BTC offline using Armory wallet.

Move Your BTC to Cold Storage

Step 1: The installation process of installing Armory Wallet on an offline computer is exactly the same as described in our previous Armory set-up tutorial.

Just as if setting up Armory on an internet-enabled computer, you will need to create or import a wallet when installing Armory. However, while importing a wallet is certainly possible, we recommend simply creating a new wallet on the offline device, just to be sure that it absolutely cannot be compromised. 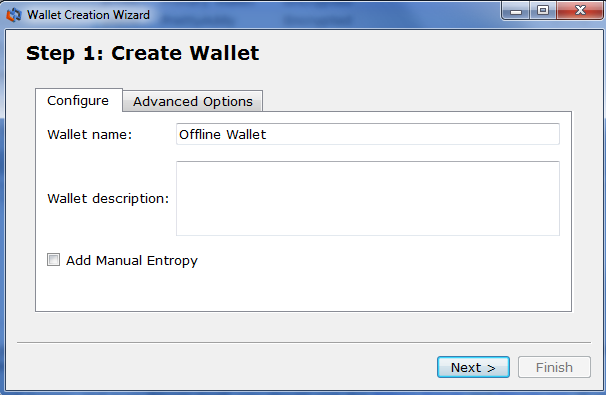 At this stage, it is assumed that you already have Armory running on your offline computer in offline mode and that you have already created your offline wallet to send and receive Bitcoins by signing and broadcasting transactions to the Bitcoin network.

Step 2: Signed transactions from your offline wallet need to be broadcasted to the Bitcoin mainnet via a watch-only version of the same wallet that needs to be added to an installation of Armory that is connected to the internet.

To create the watch-only version of your wallet, open the wallet properties, and click on ‘Export Watching-Only Copy’. 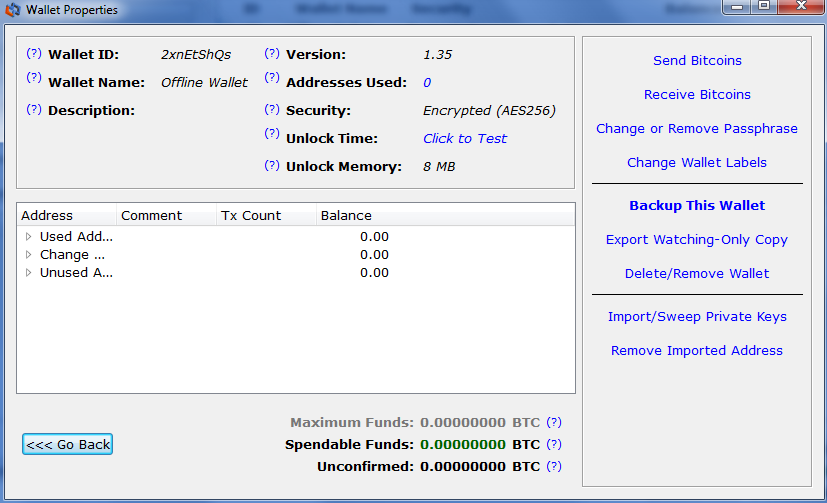 Alternatively, you could have also created a ‘watch-only’ copy of your wallet in the ‘Wallet Creation Wizard’. 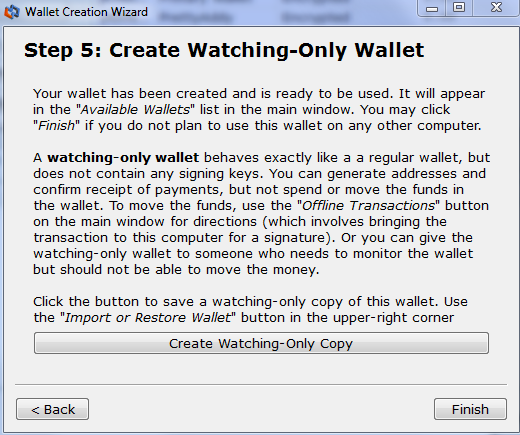 Step 3: Now, you need to either export your wallet through a backup saved on a physical removable USB drive or digitally through a text file or through printed root data. 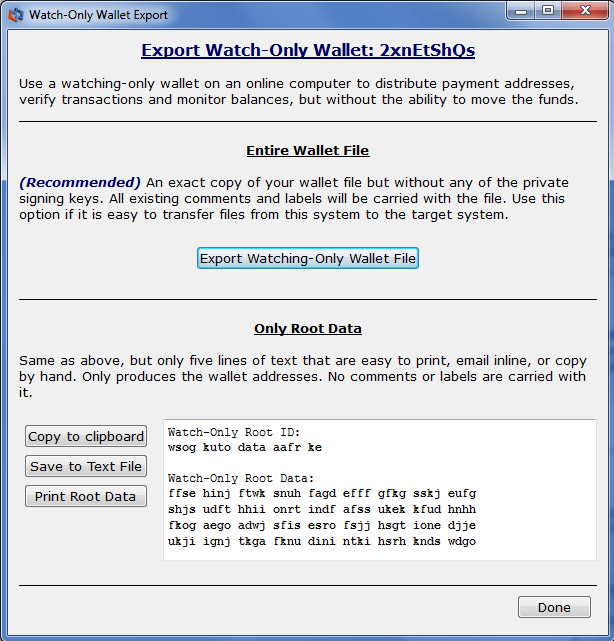 To export to a USB drive, click on ‘Export Watching-Only Wallet File’ and then save the generated file with the extension .wallet on your USB device.

Note: Any labels or comments within the wallet would be lost if you follow the text file method.

Step 4: Now, connect your USB drive that contains the .wallet file to your online computer and fire up Armory. Make sure Armory is running in online mode and the node status is connected and blockchain synced. 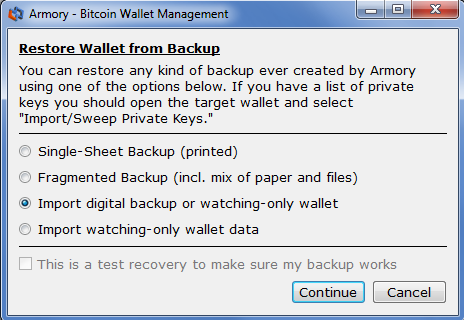 Alternatively, click on the Single-Sheet backup option if you printed your root data, or the ‘Import watching-only wallet data’ if you have your root data in a text file.

Step 6: Finally, select your watching-only wallet file from your USB drive and then click on ‘next’ to synchronize it with Blockchain.

And that’s it! You have now successfully set up your cold storage wallet and synced it with your online wallet and the Bitcoin mainnet. You will be able to use this method to broadcast signed transactions from your offline wallet, after transferring the watch-only wallet data for broadcast from your online Armory installation.